Win a double passes to see In Like Flynn

Fill in your details to enter the competition. 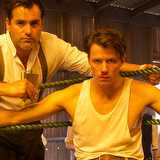 Win a double passes to see In Like Flynn is a competition by The Weekend Edition and has a prize pool of $500 for 10 prizes. A higher prize pool is something we hope to see net time. Participation is free. Directed by Russell Mulcahy (Highlander 1 & 2, Resident Evil: Extinction, Teen Wolf) with rising star, Thomas Cocquerel (Kidnapping Mr. Heineken, Billionaire Boys Club, Red Dog: True Blue) in the titular role, In Like Flynn transports audiences to 1930, before Errol Flynn became a legendary matinee idol of Hollywood’s Golden Age. Quite well known company that we have reviewed before.
Our rating 3.5 of 5.0    ©AussieContests, 2018-09-20

You may also be interested in this:
Terms and conditions of the competition "Win a double passes to see In Like Flynn "
according to the competition's organizers.Competition Terms and Conditions The Prize is as per established on competition page. The Winners will be contacted via mail unless stated otherwise. The Promoter of the Competition is The Weekend Edition, a division of Colour Chiefs Pty Ltd ABN 13 082 488 695 whose principal office is at 41 Victoria Street, Windsor, 4030. Information on Prizes and how to enter form part of these conditions of entry.
© Copyright with the competition's organizers
Terms & Privacy Policy
Contact us
Get a competition listed
Sitemap
Search
About us
CATEGORIES
Activities
Books & Magazines
Cars
Clothes
Cosmetics & Jewellery
Electronics
Food & Drink
For Kids
Holidays
House & Home
Money
Movies & Music
Vouchers & Gift Cards