For your chance to win the comedy special on DVD, all you have to do is fill out your details in the form. 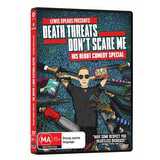 Win a Copy of Lewis Spears Death Threats Don't Scare Me DVD is a competition by Aussie Comedy Kingdom and has a prize pool of $200 for 5 prizes. The prize pool is on the low side. As expected participation is free of charge. Australian comedian Lewis Spears is infamous for his confident, dark and dangerous material. His live shows have been campaigned against by media professionals and earned him thousands of Death Threats from the easily offended. Luckily, they’ve also earned him thousands of ticket sales. We know this company and have listed some of their competitions.
Our rating 2.5 of 5.0    ©AussieContests, 2018-11-27

You may also be interested in this:
Terms and conditions of the competition "Win a Copy of Lewis Spears Death Threats Don't Scare Me DVD "
according to the competition's organizers.Entries are open to residents of Australia only. Please enter the giveaway only once.
© Copyright with the competition's organizers
Terms & Privacy Policy
Contact us
Get a competition listed
Sitemap
Search
About us
CATEGORIES
Activities
Books & Magazines
Cars
Clothes
Cosmetics & Jewellery
Electronics
Food & Drink
For Kids
Holidays
House & Home
Money
Movies & Music
Vouchers & Gift Cards