Win a DVD - Who Is America

For your chance to win the series on DVD, all you have to do is fill out your details in the form below and answer the question given. 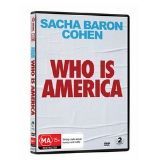 Win a DVD - Who Is America is a competition by Aussie Comedy Kingdom and has a prize pool of $39.95 for 1 prize. The value of the prize is too low to be exciting. Free entry is best. Famous for creating some of the funniest movies the world has known, Sacha Baron Cohen returns to TV for the first time in 15 years. Golden Globe® and DGA Award nominated Who is America features incendiary characters so believably performed that they can exist in the real world and even convince some of America’s most notable political and pop culture figures. Hoodwinking high-profile names such as Bernie Sanders, O.J. Simpson, Corinne Olympios, Ted Koppel, Dick Cheney and more, Baron Cohen pulls back the curtain and provides a shocking look at the nation. This biting satire created news headlines around the world, became the most talked about comedy of the year and even ended a political career. The collection features all seven episodes from the acclaimed comedy series alongside over 30 minutes of never-before-released extended interviews and deleted scenes. We have not seen many comps by them previously.
Our rating 2 of 5.0    ©AussieContests, 2019-09-07

You may also be interested in this:
Terms and conditions of the competition "Win a DVD - Who Is America "
according to the competition's organizers.Entries are open to residents of Australia ONLY. Please enter the giveaway only ONCE - duplicate entries will not be counted. Winners will be notified via e-mail and posted on the website.
© Copyright with the competition's organizers
Terms & Privacy Policy
Contact us
Get a competition listed
Sitemap
Search
About us
CATEGORIES
Activities
Books & Magazines
Cars
Clothes
Cosmetics & Jewellery
Electronics
Food & Drink
For Kids
Holidays
House & Home
Money
Movies & Music
Vouchers & Gift Cards