To win this Cool Galax RTX 2070 Super GPU, you have to follow all the requirements on the website. The requirements are to follow some of their official social media and like some post, or reposting their feeds. Good luck for your entry! The more you follow the steps, the bigger your chance to win! 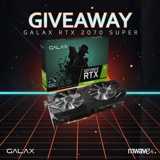 Win GALAX GeForce RTX 2070 Super GPU is a competition by Mwave Australia and has a prize pool of $829 for 1 prize. Next time a higher prize pool would do them good, Free entry is best. Thanks to the awesome people at GALAX, we're giving away a brand spanking new GALAX GeForce RTX 2070 Super EX 1-Click OC 8GB Video Card. Get that sexy ray tracing and performance with this upgrade! This competition is worth to try. The rating is also reflecting that we have only seen a few of this promoters competitions.
Our rating 3 of 5.0    ©AussieContests, 2019-11-07

You may also be interested in this:
Terms and conditions of the competition "Win GALAX GeForce RTX 2070 Super GPU "
according to the competition's organizers. Open to Australian residents only. We will contact the winner via email & announced on https://blog.mwave.com.au - Winner will then have 14 days to claim the prize. In the event the winner does not claim the prize he/she will forfeit it and Mwave will do a re-draw. Entries open on 4th November 2019 and close 25th November 2019. This promotion is in no way sponsored, endorsed or administered by, or associated with, Instagram or Facebook.
© Copyright with Mwave Australia
no ads
Terms & Privacy Policy
Contact us
Get a competition listed
Sitemap
Search
About us and credits
CATEGORIES
Books & Media
Cars
Clothes
Cosmetics & Jewellery
Electronics
Food & Drink
For Kids
Holidays & Activities
House & Home
Money
Vouchers & Gift Cards