Win this beast of a Gaming PC worth $3,599 AUD powered by an NVIDIA GeForce RTX 2080 Super graphics card and Intel Core i9 9900K. Thanks to the awesome people at Ubisoft Australia, the winner of the PC will also receive a Rainbow Six Siege prize pack which includes an R6 Hoodie (XL), R6 water bottle, R6 bottle opener and Twitch Chibi figurine. Answer the question below and they'll pick the best response. In 25 words or less, let them know your favourite Rainbow Six: Siege operator and why? 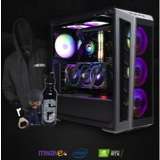 Win Intel Gaming PC & Rainbow Six Siege Prize Pack is a competition by Mwave Australia and has a prize pool of $3,600 for 1 prize. No complaints about the prize pool but more is always better. Entry to this competition is entirely free. This competition has a high prize pool. It offers a powerful and supercool Gaming PC. The Nvidia GeForce RTX 2080 Super is a more powerful graphics card than its predecessor, but the performance increase isn't enough to blow your mind. Still, it may convince people with older models to jump into the modern age of graphics cards. So, what are you waiting for? Join now! We have not listed and review an awful lot of their promotions in the past.
Our rating 4 of 5.0    ©AussieContests, 2019-12-08


Tips for joining a Words or less Competition

Check out the overview of contest types to learn more on how to enter and find similar contests. Competitions where your entry needs to be motivated with a short text, often 25 words or less or 100 words or less in length. The winner of the competition is determined by a jury which is reviewing all words-or-less entries and deciding on the best or most original contribution. Words or less competitions are considered games of skill where your win is not based on chance but on the skill that you demonstrate. Often words or less competitions give you somewhat higher odds than other competitions such as straight lucky draws. In some ways these words or less competitions are quite similar to general creative competitions but you need to be concise which is a challenge for some. Having said that there are also words or less comps where the word limit is one thousand which makes that a different contest all together. Most WOL are 25 words though. For more on the concept of WOL competitions and how to win them see our blogs words or less competitions in Australia and How to win Words-Or-Less Comps . Try to be creative or funny in your answer. Also if possible mention the product or brand so you have a higher chance of your answer being selected by the jury. And absolutely make sure to stick to the word limit. If it says "25 words or less" they will disqualify you if you do 26 words or more. Some people enter quickly lots and lots of words or less competitions to increase their chances of winning. In principle, this is a good approach. Usually words or less challenges have less participants because some people just cannot overcome the fear of blank paper. It is also true that for quite a few words or less competitions you can assume that the winner is almost determined by chance. If they have one thousand WOL entries it is very difficult for a jury to go through all of them. So although not quite right, in many cases the jury will look at some random selection of entries a bit closer and determine the winner from them. Nevertheless, you must put in some effort with your answer to have a chance. Even if the jury does not read all entries they will never award the prize to a contribution that is just lousy. So find a middle way between making good WOL entries and entering lots and lots of them! One thing you can actually do to make your participations easier is to recycle your answers. A good motivation to win a KitchenAid may also work for a competition for a Breville food processor!

You may also be interested in this:
Terms and conditions of the competition "Win Intel Gaming PC & Rainbow Six Siege Prize Pack "
according to the competition's organizers. Open to Australian residents only. We will contact the winner via email & announced on Mwave.com.au social media platforms - Winner will then have 30 days to claim the prize. In the event the winner does not claim the prize he/she will forfeit it and Mwave will do a re-draw. Entries open on 4th December 2019 and close 19th December 2019. Entries will be judged by Mwave staff based on creativity. This promotion is in no way sponsored, endorsed or administered by, or associated with, Instagram or Facebook.
© Copyright with Mwave Australia
no ads
Terms & Privacy Policy
Contact us
Get a competition listed
Sitemap
Search
About us and credits
CATEGORIES
Books & Media
Cars
Clothes
Cosmetics & Jewellery
Electronics
Food & Drink
For Kids
Holidays & Activities
House & Home
Money
Vouchers & Gift Cards